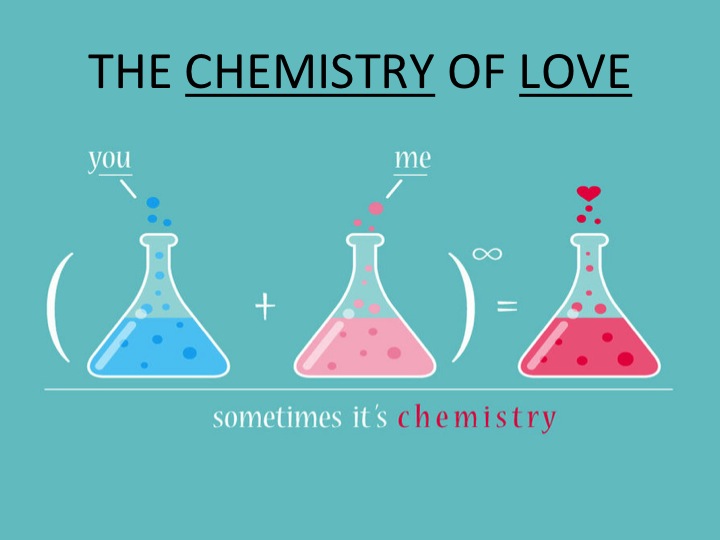 Love is a complex neuropsychological and physiological phenomenon. On a physiological level, people who fall in love experience an increase in heart rate, sweaty palms, heavy breathing and so on. Also, there are complex neuropsychological processes such as reward and pleasure activities, trust, attachment, which are known as limbic processes. These processes entangle with adrenaline, testosterone, estrogen, dopamine, serotonin, oxytocin, vasopressin and other chemical neurotransmitters. From an evolutionary standpoint, all the above processes are beneficial for the survival, reproduction and motivational purposes. However, with an evolved human society, the experience of love can be examined by the chemical process which is a predominant factor that influences the three core brain systems: lust, attraction and attachment; also, it is essential to differentiate between romantic and maternal love, feeling of closeness and cheating; also inducing motivational, health-promoting, stress reducing and many other possibilities.

The beauty of two chemical compounds being combined is resulting in developing forming something new. Such as combining hydrogen and oxygen results in building water. Without both of them being present the formation of water will not be possible. The combination is a potent force. Similarly, when the set of chemical compounds interact in humans something beautiful like love can be experienced. A sequence of chemical reactions in our bodies activates the feeling of love. Therefore, falling in love is not only a matter of our personal choice or decision, but this is also a natural event we cannot omit or control. In this paper, the primary neurobiological pathways, as well as various psychological reactions of love phenomenon will be discussed.

In the article “The Chemistry of Love: Could the first opportunity to fall in love influence our ability to love for a lifetime?” by Denise Fisher, she shares an interesting study conducted on voles. The prairie vole is the type of mammal that is monogamous, so they only have one partner for their lifetime. On the contrary, their close relative the montane vole, are very promiscuous. Genetically these two types of voles are similar; yet, the prairie vole has receptor sites for oxytocin in the area of the brain responsible for reward and pleasure, the limbic system, but it is absent in the montane vole. The limbic system is the portion of the brain that deals with three key functions: emotions, memories, and arousal (“What is the Limbic System in the Brain? – Definition, Functions & Parts”). This system consists of several parts, one of which is hypothalamus that is responsible for generating the chemical messengers, neurotransmitters, called hormones. Hormones participate in vital functions in the body, such as controlling water levels and food intake, sleep cycles, and temperature regulation. These neurotransmitters (a substance that transmits the actual signals) also serve as pathways that transfer messages from inner and outer parts of the limbic system, which are involved in love and multiple emotional states.

These emotional states define the experience that we call love. However, there is a physiological and neurobiological complexity that stands behind the concept of love, which can scientifically explain our involvement in this feeling. Recent research about the science behind love by Helen E. Fisher, Ph.D. biological anthropologist, at Rutgers University, introduces three different stages – lust, attraction, attachment – which are involved in numerous chemical reactions in our bodies (“Why We Fall in Love: The Science of Love”). Also, there are various hormones in the body helping to stimulate these three stages, which take place independently as well as interdependently. Namely, these hormones are estrogen and testosterone (lust stage); dopamine, serotonin, phenylethylamine, norepinephrine, adrenaline (attraction stage); oxytocin and vasopressin (attachment stage).

During the primary stage, so-called lust stage, people experience sexual desire towards each other, which is prompted by the sex hormones, testosterone, and estrogen. Testosterone is a primary male hormone, which for sexual and reproductive development during birth and puberty stage (e.g., evolving of male sex organs, voice changing, a growth of facial and body hair). Women also produce testosterone; however, in lower levels than men. Testosterone belongs to a class of male hormones called steroids — the hypothalamus and pituitary gland control testosterone production, where the pituitary gland regulates the testosterone production and transmits the message on to the testes. Chemicals and hormones in the bloodstream are involved in this interaction. (“What is Testosterone?”). Estrogen or oestrogen is one of the most important female sex hormones, which is responsible for regulation of the female reproductive system (e.g., preparation of lactation and breastfeeding) and contributing in puberty (e.g., breast growth, menstrual regulation). Estrogen, just as testosterone, is a steroid hormone, and it is originated from cholesterol. “Estrogen production is primarily located in the developing follicles in the ovaries, called the corpus luteum, and the placenta. Other tissues produce smaller amounts as the breasts, liver, and adrenal glands.” (“Estrogen. The Visual MD”). The chemical formula of estrogen is C18H24O2. Lust stage is vital regarding the continuation of mating and reproductive functions; also it is significant by its health promoting and stress-reducing characteristics.
The next stage is the attraction, which is defined as a stage when people start to experience the actual feeling of love. Affinity is characterized by a sense of excitement, impatience, rush, and obsessive thinking about someone, making fast and perhaps not very rational decisions. Furthermore, the attraction stage that is characterized by the change in attitude reactions, personality, and stress responses is one of the most delightful experiences in life. The chemicals, such as adrenaline, dopamine, serotonin, phenylethylamine (PEA) and norepinephrine, mainly induce these moods and feelings. These neurotransmitters can be divided into two groups, the chemicals that excite the central nervous system (CNS) and the ones, which inhibit the excitement (“Love Molecule”). Excitatory chemicals include adrenaline, serotonin, phenylethylamine, and norepinephrine.

Love can also be perceived as a stressful experience, and adrenaline is a hormone responsible for it. Adrenalin is formed by the adrenal glands when someone is experiencing high stress or under exhilarating conditions. This hormone is responsible for so-called “fight or flight” response, which exhibits heart rate acceleration, blood flow to the muscles and oxygen to the lungs, and an increase of the blood pressure (“What is Adrenaline? WiseGEEK”). The chemical formula of adrenaline is C9H13NO3. However, excessive stress might provoke depression, which often leads to the breakdown of social relationships (“The Neurobiology of Love”).

Serotonin is synthesized in the pineal glands, and it has multiple regulatory roles in the nervous system. Serotonin regulates sleep and wakefulness, blood pressure, and has a controlling position in intestinal peristalsis. “At increasing levels, serotonin stimulates nervous tension, drowsiness, heart palpitations, water retention and inability to concentrate and perform” (“Love Molecule”). Interestingly, Sandra Langeslag and her colleagues (2012) report that men and women who are in love inhibit different levels of serotonin levels. The men in love tempt to have lower levels of serotonin, whereas women – higher. The subjects in this study reported being preoccupied in thought about their beloved 65% of their day. The chemical formula of serotonin is C10H12N2O. 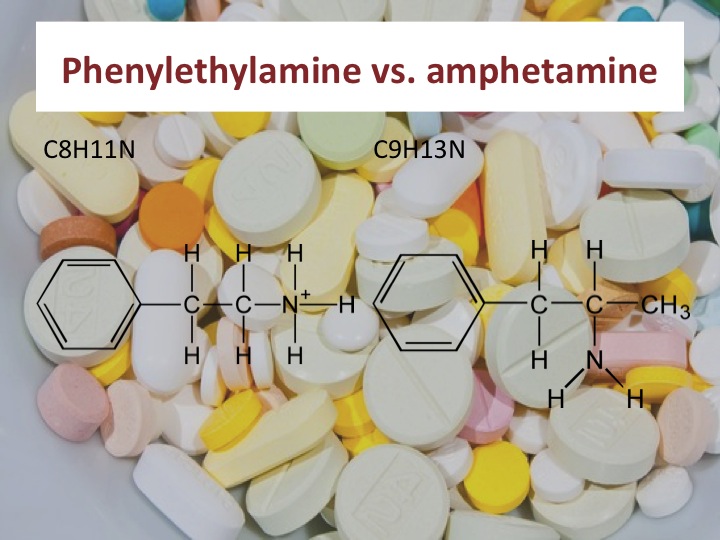 Norepinephrine’s chemical formula is C8H11NO3. Norepinephrine is always present in the blood, and being a stress hormone, it affects attention and responding. As adrenaline, norepinephrine also causes the “fight or flight” response, which leads to increasing heart rate, releasing of glucose from energy stores, and increasing blood flow to the muscles (“Norepinephrine”). High levels of norepinephrine together with adrenaline produce elation, intense energy, gives the feeling of joy, and decreases appetite, triggers hostility and irritability.

Dopamine is a neurochemical that gets released by the brain when we feel good, and it inhibits the excitement, and feeling of pleasure within the body. The chemical formula of dopamine is C8H11NO2. Dopamine is considered to be a natural stimulant, and it has a similar effect on the brain like taking cocaine. Researcher Helen Fisher said, “No wonder lovers talk all night or walk till dawn, write extravagant poetry and self-revealing e-mails, cross continents or oceans to hug for just a weekend and change jobs or lifestyles.” Dopamine and norepinephrine have similar chemical structures; dopamine is a predecessor to the norepinephrine. Therefore, a certain level of dopamine has to be reached for adrenaline to be produced. The natural sources for dopamine are proteins (meat, nuts, eggs, etc.), which will be broken down in the digestive system into amino acids – a precursor for dopamine. Hence, vegetarianism might not be a good choice for a person who wants to be more sensitive (“Chemistry of Love”).

The final stage is defined as an attachment, which takes place after a couple successfully experienced the lust and attraction stages. This stage is considered to be an advanced level and essential for creating a family, producing offspring, and establishing commitment in a relationship. Attachment activates regions in the brain that correspond with areas of emerging oxytocin and vasopressin. Zeki S. in “The Neurobiology of Love” states, “Oxytocin and another chemically linked neuro-modulator, vasopressin, seem to be particularly linked to attachment and bonding. Both are produced by the hypothalamus and released and stored in the pituitary gland, to be discharged into the blood, especially during orgasm in both sexes and during childbirth and breastfeeding in females. In males, vasopressin has also been linked to social behavior, in particular to aggression towards other males.” Oxytocin (OT) is also known as “the cuddle hormone,” is released by men and women in equal proportions (unlike dopamine).

Oxytocin formulates the depth of love and forges the attachment the partner. Ruth Feldman at Bar- Ilan University reports that oxytocin correlates with longevity of the relationship, and the couples with the highest levels were more attuned to each other, touched each other more often, this is why the bond of attachment becomes more substantial. Vasopressin, known as an anti-diuretic (helps control body water balance by reducing urination, opposing diuresis), it performs its operation along with the kidney, therefore controlling thirst, which called a negative feedback loop. This hormone is rapidly released in a significant quantity after sexual intercourse. Although the brains of women and men are structurally different, they both secrete vasopressin from the posterior pituitary gland (“Why We Fall in Love: The Science of Love”). Research by Esch and Stefano suggests that oxytocin and vasopressin reinforce the attachment between mother and child, improve interpersonal functioning, explain greater spousal support, relationship maintenance, and attachment security.

At first, love might seem like a romantic endeavor that happens partly due to personal choice and partly due to the surrounding circumstances. It is often said that love is blind, but in fact, it is us who are blind to the scientific constituency of love. Based on scientific research, it was suggested that love could be broken down into three distinctive stages: lust, attraction, and attachment. Each stage has unique chemical processes, which serve specific and significant purposes. Lust, for example, is caused by estrogen and testosterone, which contribute to the primary human goal of reproduction. Attraction happens due to adrenaline, dopamine, serotonin, phenylethylamine, and norepinephrine, which cause the feeling of excitement, impatience, rush, and obsessive thinking about someone, making fast and perhaps not very rational decisions. The final stage, attachment, is the most vital and the most elaborate stage. Such complexity is not just psychological, oxytocin and vasopressin, the two chemicals primarily responsible for attachment, are incredibly complex in their chemical structure as well. Based upon the above studies, it is evident that love is a combination of highly complex chemical processes that we often overlook. Therefore when your significant other is acting odd, recall all the chemical complexity that is overpowering their rational thinking.

Fisher D. The Chemistry of Love. Print “What is the Limbic System in the Brain? – Definition, Functions & Parts”. Study.com.

Langeslag, Veen, and Fekkes. Blood Levels of Serotonin Are Differentially Affected by Romantic Love in Men and Women.